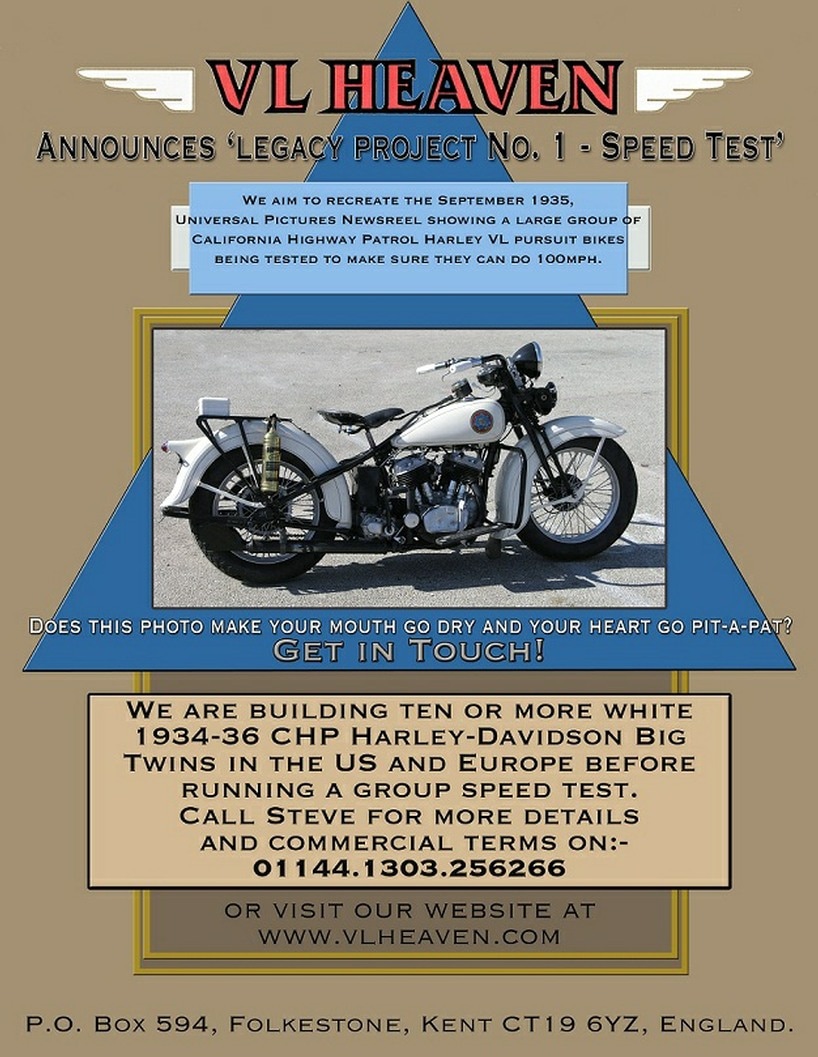 1935 Speed test footage:
VL Heaven Legacy Project No. 1
Let's look at Harley-Davidson Police bikes and policing methods in the 1930s, then commercial terms for this project:

The Lawbreaker's Challenge
"Officials all over the country are finding that the methods of yesterday cannot cope with today's complex police problems. A few short years ago machine-gun bandits, kidnapers, youthful holdup men, racketeers and gangsters were scarcely heard of, but now they have become bywords in every community throughout the land.

The issue is the need for quick apprehension and swift justice for those individuals who have no respect for law, order, or the rights of others. To whip this group into line there is an effective solution - virile, young, officers mounted on fleet Harley-Davidson motorcycles. Nothing will strike more terror into the heart of a law violator than the scream of a police motorcycle siren. He realizes flight is futile for he knows too well that the motorcycle officer can flash through traffic or fly over the highway and quickly overtake him. And few lawbreakers will take a chance against motorcycle officers who are physically hardened and mentally quick and sharp from their service in the open air.
The public is demanding that the menace of the lawbreaking motorist and the criminal be broken. An adequate number of modern, Harley-Davidson police motorcycles is a vital part of the police equipment your department should have, to give your community the protection it demands and needs." (1934 Police Brochure).

1934 Harley-Davidson Brochure
"They're newer than new, hotter than hot, faster than fast, and neater than neat. In fact, brother, they're honeys! These new 1934 model Harley-Davidsons make previous models, as good as they were, look out of date, and no foolin'. These 1934 dream ships with their ultra-modern styling will make your old heart go pit-a-pat when you check them over. Boy, every time we look at a 1934 model our fingers start to itch to get at the throttle and listen to the pretty music from that new muffler.
Look at the new fenders. Ain't that sumpin! Streamlining adapted to a motorcycle at its very best. Air-flo design is what we call it, and it matches up in style with the dynamite and wallop packed in the 1934 VLD motors. When you pour in that throttle, they cut loose and start producing real horses, actually 36 h.p. at 4600 r.p.m., and we don't have to tell you that this means miles per hour and lots of 'em. When this husky baby starts drinking in gasoline through that Y-shaped, no resistance intake manifold, things start to happen and your speedometer needle begins to move like the second hand on a watch.
The 74 Big Twin is the battle wagon of the 1934 Harley-Davidson line. Flashing, rocket-like speed, bulldog power and unlimited dependability are the characteristics of this TNT powered speedster. Class in every line. Just look at those new guards, the new tank insignia, the chrome plated covers on the chain guard, the new Comfort Saddle and the trim tail light. Last year our special motors were listed at $10 higher than the standard, but we're coming in on the New Deal, and for 1934 the $10 extra charge is taken off. How's that, brother?"

Commercial Terms
This project aims to build about ten 1934-36 Harley-Davidson police pursuit bikes, in the US and Europe, then check that they will record 100 mph on their speedometers, as the California Highway Patrol newsreel of September 1935. If you want to be part of the project, you can purchase a bike as follows.